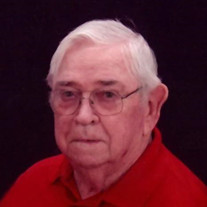 Franklin R. Dunn, 83, of Lacon formerly Chillicothe, died on August 26, 2016 at Unity Point Methodist in Peoria. Born in Lacon on March 6, 1933 to the late Morris and Bernadine Vest Dunn, he served in the Army in Korea 92nd Field Artillery as a forward observer.

Frank was previously married and had four children. He then married Cynthia Cordes in Lacon on December 11, 1982 and they have three children.

Frank worked for Caterpillar Security for 40 years, retiring in 1994. He was active in the Chillicothe Fire Department for over 30 years, attaining the rank of Assistant Chief. He was a member of Lacon American Legion, the Knights of Columbus, Chillicothe VFW, firefighter's Union Local 300, Honor Flight Participant 2015, and past VFW Commander. Frank liked to bowl, golf and was a fan of baseball, especially the St. Louis Cardinals.

He was preceded in death by four brothers, one sister, his son Robert, and son in law Charlie Pannell.

Services for Frank will be on Wednesday August 31 at 11am at St John's Lutheran church in Lacon with a visitation held from 5-7pm on Tuesday evening and one hour prior to the service, both at the church. Joe Bella and Dick Hanson will officiate. Burial will be in the Immaculate Conception Cemetery in Lacon and memorials can be made to Greater Peoria Honor Flight or St John's Lutheran Church. Online condolences can be left at lenzmemorialhome.com

To send flowers to the family or plant a tree in memory of Franklin R. Dunn, please visit our floral store.

To send flowers to the family in memory of Franklin Dunn, please visit our flower store.