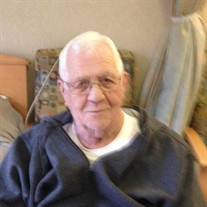 Franklin G. Rinaldo, 83, of Varna, died on February 5, 2018 at St. Joseph Nursing Home in Lacon. He was born on July 6, 1934 to the late Michael Sr. and Adeline Cresto Rinaldo on the family farm near Rutland.
Frank Served in the Army from 1957-1959. After leaving the Army, he was a truck driver for a few years before becoming a carpenter. Frank retired with over 50 years' service as a proud member of the Carpenter's Union Local 195. He was also a member of the Magnolia American Legion Post.
Frank is survived by his son Jeff (Sherry) Rinaldo of Varna, daughter-in-law Anne (Brian) Rinaldo of Varna; Grandchildren Justin, Kieron, Jessica, Tabatha, and Brandi; and 7 Great-Grandchildren.
He was preceded in death by his son Brian; brothers Joe, Mike, Bob, Albert, Johnny, Don, and Ed; and granddaughter Amber.
Frank enjoyed spending time with his sons and socializing with friends at the local tavern. Frank's health began to decline preceding the sudden loss of his son, Brian, who passed away on September 5, 2017 after a short battle with cancer.
A funeral service will be held on Friday February 9 at 11:30am at Lenz Memorial Home in Lacon. Burial will follow in the Immaculate Conception Cemetery in Lacon. Memorials can be made to the Magnolia American Legion or Varna Fire Department and online condolences can be left at lenzmemorialhome.com

To send flowers to the family or plant a tree in memory of Franklin G. Rinaldo, please visit our floral store.

To send flowers to the family in memory of Franklin Rinaldo, please visit our flower store.