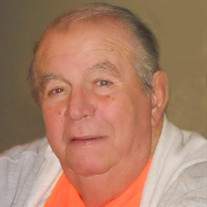 Gary Kenyon, 74, of Lacon, died on August 20, 2016 at St. Joseph's Nursing home in Lacon. He was born in Peoria on May 30, 1942 to the late Leonard & Helen Bestold Kenyon. Gary was married to Juanita "Susie" Smith and had four daughters.

He served his country in the Army in Germany, worked on the railroad for a while, and worked at Caterpillar as an electrician for 30 years. After retiring from Cat he enjoyed helping local farmers and was also a foreman at Hardin welding. Gary was a proud member of UAW 974 and the AMVETS, helping make possible the local 100 horse rides that the local AMVETS would put on. He was a big supporter of girls' softball in the area.

He was preceded by his sister Karen McNutt and brother Roger Kenyon.

Cremation rites have been accorded and a memorial visitation will be held on Thursday, August 25 from 5-7 pm at Lenz Memorial Home in Lacon with private family burial at a later date. Memorials can be made to Saint Joseph's Nursing Home or Lacon Summer Ball Program. Online condolences can be left at lenzmemorialhome.com


To send flowers to the family or plant a tree in memory of Gary Kenyon, please visit our floral store.

Please click here to view the video tribute
To send flowers to the family in memory of Gary Kenyon, please visit our flower store.