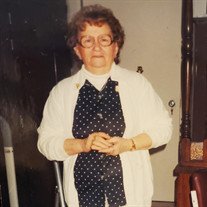 Gayle L Cowell 84 of Chillicothe died on February 8, 2021 at Lacon Rehab and Nursing in Lacon. She was born in Chillicothe on November 7, 1936 to the late Virgil and Jesse Allington Colwell. Through her life Gayle had been married to Calvin Davis and later married Jack Cowell. She was employed by Proctor Endowment in Peoria for over 30 years starting as a cook and later in housekeeping.
Gayle is survived by her children Melvin (Tammy) Davis of Chillicothe, Pat Brown of Sparland, Debbie Deffenbaugh of Lacon, Steve Davis of Sparland, Sandy Davis of Chillicothe, Brenda (Scott) Wunder of Lacon, Kim Cowell of Bartonville, 25 grandchildren and many more great grandchildren. She was also preceded in death by her former husband's Calvin and Jack.
Cremation rites have been accorded and a graveside service will be held on April 17th at 1 pm at the Chillicothe City Cemetery in Chillicothe. Memorials can be made to the donor's choice of charity and online condolences can be left at lenzmemorialhome.com

To send flowers to the family or plant a tree in memory of Gayle L. Cowell, please visit our floral store.

To send flowers to the family in memory of Gayle Cowell, please visit our flower store.