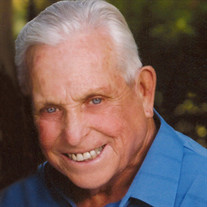 Also surviving are his daughter Cheri Keedy of Lacon, IL; son Mike Keedy of Varna, IL; his kitty (and buddy) and his kitties he took in. He was preceded in death by his parents and one sister Betty Vaughn.

Gene was a United States Air Force veteran. He served his country for 13 years as a flight engineer and mechanic on a C-47 airplane. He retired from the Air Force in 1965 with the rank of Staff Sergeant.

Gene worked at Sundstrand Corporation and Watercotts. He later worked for The Marshall County Highway Department, retiring after 27 years of service. His hobbies included building and flying radio controlled planes, working in his garden, and taking care of his kitties. He always had a smile on his face and loved to tell jokes. He was a very dedicated husband and father and loved spending time with his family.

Visitation will be from 4 to 6 p.m. on Sunday, April 24, 2016 at Lenz Memorial Home in Lacon with Military honors beginning at 6 p.m. Cremation will be accorded. A private family inurnment will take place at a later date.

Memorials may be made to Varna Ambulance. Online condolences can be left at lenzmemorialhome.com


To send flowers to the family or plant a tree in memory of Gene Keedy, please visit our floral store.

Please click here to view the video tribute
To send flowers to the family in memory of Gene Keedy, please visit our flower store.