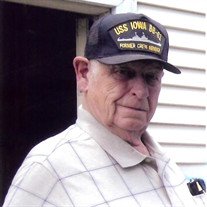 George Walter Smith, 80, of Lacon passed away on November 13, 2015 at Kindred Hospital in Peoria.

Born on August 11, 1935 in Peoria the son of the late Charles and Violet Chapman Smith, George married Ruth Clark on July 29, 1963 in Wahiawa Oahu, Hawaii.

George served proudly in the US Navy for 21 years rising to the rank of First Class E6 as a fire control technician. He was blessed with two families, his wife & children, and the family of friends he acquired in the Navy. He was a longtime member of American Legion Post 593 in Lacon.

George was an avid duck hunter that worked at Golden Eye Duck Club for many years. His greatest pleasure was when being surrounded by his grandchildren telling stories of his childhood antics, which were many, or his Navy stories, which there were even more. Then he would throw in a colorful joke which left all in anticipation of the next one.

Cremation rites have been accorded and a memorial service will be held at Lenz Memorial Home in Lacon on Thursday, November 19, 2015 at 11am, with Reverend Ross Wyman officiating. Visitation will be held on Wednesday evening from 4-6 pm, also at Lenz Memorial. Burial will be in the Lacon Cemetery.

Memorials can be made to the American Legion Post 593 or Lacon Congregational United Church of Christ. Online condolences can be left at lenzmemorialhome.com.


To send flowers to the family or plant a tree in memory of George Smith, please visit our floral store.

Please click here to view the video tribute
To send flowers to the family in memory of George Smith, please visit our flower store.