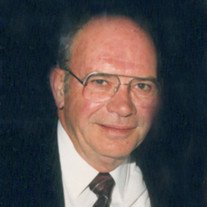 His funeral will be held at 11 AM
on Thursday, April 24, 2014 at Kibler-Brady-Ruestman Memorial Home
in Bloomington with Fr. Ric Schneider O.F.M. officiating.
Visitation will be held from 9 - 11 AM also on Thursday at the
memorial home.

Interment will be at the Minonk
Township Cemetery in Minonk. In lieu of flowers, memorials may be
made to the American Heart Association in Gordon's name.

Surviving are two sons, James
(Barb) Danforth of Bloomington and Mark (Polly) Danforth of
Springfield; and a sister, Myra Cufaude of Minonk.

He was preceded in death by his
wife, Velma; his parents; and a brother Bruce Danforth.

He graduated from Minonk Community
High School. Gordon became a Certified X-Ray Technician
through the American College of Radiology. He spent most of his
working career as a machinist for the Hyster Company and then later
for Caterpillar Tractor in Peoria.

Gordon proudly served his country
in the United States Navy on the USS Dennis J. Buckley during World
War II in both the Atlantic and Pacific Theatres.

He served as a Boy Scout leader for
Troop 140 in Peoria. Gordon was a member of the Sentral
Illinois Radio Society (SIRS) in Bloomington. He enjoyed building
RC model airplanes and sailboats.

Online condolences and memories of
Gordon may be sent to the family
at kiblerbradyruestman.com.

To send flowers to the family or plant a tree in memory of Gordon G. Danforth, please visit our floral store.

To send flowers to the family in memory of Gordon G. Danforth, please visit our flower store.