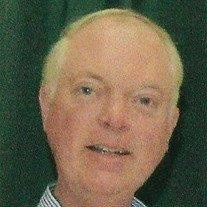 Gordon "Gordie" E. Holler, 58 of Sparland, passed away peacefully in his home on Friday, May 10, 2019.
Visitation will be held on Thursday, May 16, 2019 from 4pm to 7pm at Lenz Memorial Home in Lacon. The funeral will be on Friday, May 17, 2019 at 10am, also at the funeral home. Pastor Ben Carlson will officiate. Burial will be at Lacon Cemetery.
Gordie was born in Peoria, IL on December 3, 1960 to William and Imelda (Henkins) Holler. He married his love of his life, Lori Sherman, on June 22, 1991. She survives.
Also surviving are his children, Adam and William "Will" Holler; his brother, David (Shirley) Holler of Marquand, MO; and his half-brother, Thomas (Geri) Frew of Glendale Heights, IL. He was preceded in death by his parents; one brother, B. Jay Holler; and one nephew, Ryan Holler.
Gordie was a Manufacturing Engineer at J.T. Fennell Co. in Chillicothe, IL. He was called by his wife, "husband of the universe." His other nickname was "tough as nails" as he battled and won many health issues. He was a devoted father who stayed active in his boy's life. He coached and ran summer baseball for the years his boys played. He was involved in the boy scouts committee for many years and he made sure Adam and Will achieved the rank of Eagle Scout. He would make every effort to go wherever to watch the boys when they were in high school sports.
Gordie enjoyed golfing, playing cards and working in the garage. The best part of his life was vacationing with his wife and boys in Chetek, WI. He had many lifelong friends because of his wonderful character.
In lieu of flowers, the family would be honored to have memorials made to the family for Gordie's boy's college education.

To send flowers or a memorial gift to the family of Gordon E. "Gordie" Holler please visit our Sympathy Store.


To send flowers to the family or plant a tree in memory of Gordon "Gordie" E. Holler, please visit our floral store.

To send flowers to the family in memory of Gordon Holler, please visit our flower store.