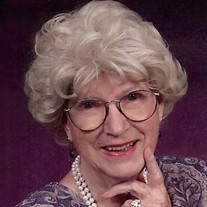 She was born April 24, 1920 at her home in Putnam, IL to the late Miles and Matilda Hatcher Henkins. She married Thomas Frew on October 30, 1940. They had one son, Thomas (Geri) Frew Jr. of Glendale Hts., IL. They divorced shortly after WWII ended. She then married Bill Holler on August 8, 1947 in Lacon, IL. He passed away on February 26, 1997. They had three sons, B. Jay (Karen) Holler of Lacon, IL; David (Shirley) Holler of Marquand, MO; and Gordon (Lori) Holler of Sparland; IL, 12 grandchildren; 18 great grandchildren; and 4 great great grandchildren. She was also preceded in death by three half-brothers and three half-sisters, and one grandson.

Imelda graduated as the salutatorian of her class from Henry High School. She was also the pianist for the school functions and the Sunday school at the Christian Church. Imelda worked several jobs for short periods to supplement the family income, but was mainly a stay at home mother. During the family raising days, Imelda was a 4-H leader, Den Mother, taught Sunday school and held county and state offices for Homemakers Extension. She was also nominated for State President for Illinois Homemakers Federation but withdrew her name to stay at home. Imelda also held family reunions over the years and published two books on the Henkins family collecting over 2,400 names. All before the internet was even around.

She loved to travel and camp. Starting out in a tent and then over the years moved up from fold-out camper, trailer, to finally a motorhome. When Bill retired, they turned into "snow birds" and traveled to Donna, TX every winter and stayed at a trailer park, camping alongside of family and friends from Illinois. Sewing, embroidering, knitting, croqueting and quilting were her hobbies all her life. While in St. Joseph Nursing Home she spent countless hours writing & printing out letters on her computer in her room.

She was a member of the Lacon-Sparland United Methodist Church.

Services will be Saturday, May 7 at 12 noon at Lenz Memorial Home in Lacon. Visitation will be held one hour prior to service. Burial will be in the Putnam Cemetery. Memorials may be made to the Lacon-Sparland United Methodist Church or the American Legion Post 593. Online condolences can be left at lenzmemorialhome.com

The family would like to thank the St. Joseph Nursing Home for the loving care they provided Imelda over the last 5 years. They made her stay there pleasant and comfortable.


To send flowers to the family or plant a tree in memory of Imelda Lois Holler, please visit our floral store.

Please click here to view the video tribute
To send flowers to the family in memory of Imelda Holler, please visit our flower store.