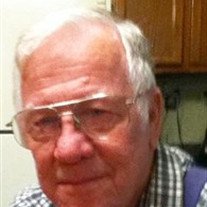 
He served in the U.S. Navy during the Korean
conflict, aboard the USS Mindoro carrier ship stationed in Norfolk,
Va. He owned and operated Phillips 66 service station in Henry and
delivered heating fuel. Jack also served as a Marshall County
deputy sheriff during the late 50's, 60's and 70's under three
different sheriffs. He and his family returned to Lacon in 1973 and
ran the Texaco Service Station there until 1982. During that time
he also worked in the trucking sales business until retiring in
2010 from Sterling Trucking in East Peoria.

Jack was elected North Ward Aldermen in 1999 till the present
time. He served on several committees during his 15 years
completing many projects; Lacon Cemetery restoration of grave
stones, sidewalk replacement , Weber Park and memorial benches,
lighting, pavilions and trees in City parks. He had great pride in
his hometown community. He was also a member of American Legion
Post 593.

Jack always had a passion for speed, racing boats in the 1950's
and early 60's. Then his passion turned toward Stock Car Racing in
the late 60's until 1982. He raced in Peoria, Sterling, Freeport,
Davenport, Springfield and tracks in Wisconsin. He was a member of
the Peoria Oldtimers Racing Club and Inducted in 1998 into the
Peoria Oldtimers Hall of Fame. He was an inspiration to many race
car drivers and the racing community.


Jack's other passions were traveling around the US
every summer with his family. Later in life he and Lillian enjoyed
traveling and spending time in Florida. Jack was always looking out
for everyone he came in touch with and tried his best to help where
he could. Jack was a great family man that always stood by his
children to show them the way. He was a loving husband, father,
grandfather, and friend to so many. He will be greatly missed.


He is survived by his sons Jackie Lee, Jr (Sherry)
of Lacon and Duane of Princeton, daughters Lydia (David) Newhalfen
of Henry and Connie (Mike) Anderle of Lacon. He is also survived by
his grandchildren Jennifer Anderle, Roselyn Rebholz, and Danielle
and Marshall Newhalfen. He was preceded by three sisters, Jo Ann
Kirkbride, Helen Jane and Karen Lou, and one grandson.

Services will be Monday January 13 at 11:00 am at Lenz Memorial
Home with a visitation one hour prior. Visitation will be Sunday
January 12 from 2-4 pm. Jack will be lying in state at Lenz's on
Saturday from 9-5. Memorials can be made to a charity of the
donor's choice. Online condolences can be left at
lenzmemorialhome.com

"He was a man that wasn't afraid to tell it like it was."

To send flowers to the family or plant a tree in memory of Jackie "Jack" Lee Rebholz,, please visit our floral store.

To send flowers to the family in memory of Jackie Lee Rebholz,, please visit our flower store.