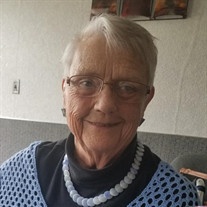 Jacquelyn Ann Keffeler, 80, passed away peacefully, with her family in attendance, at 9:44 am, on Saturday December 8, 2018, after an 18 year battle with Parkinson's disease.
Jacque was born on October 19th, 1938, in Rapid City, South Dakota, to the late Joe and May (Sloan) Foley. She was the youngest of 5 children born to the Foleys. Her siblings were JoVonne, Charles, Joseph, and Mervyn.
Jacque was raised on the Elk Creek, in Piedmont, SD. In 1955, she graduated high school from St. Edwards Academy, Sturgis, SD.
She studied education at Black Hills State College. She was teaching in the city of Deadwood, SD when she met her future husband, Gary Keffeler. They began dating about a year later and were married on September 11, 1961, at the Immaculate Conception Church in Bear Butte, SD.
Over the course of the next 7 years, they had five children; Brad, Garilyn, Charlie, Jason and Shanda.
Gary and Jacque moved to Peoria, IL in January of 1968, when Gary took an engineering position with Caterpillar, Inc.
They lived in Peoria until the summer of 1970 when they moved to the small town of Lacon, IL.
Jacque had a number of different jobs, but derived her greatest joy as a teaching assistant at the Lacon Grade School.
They lived in Lacon until 1992 when Gary was transferred with Caterpillar, Inc. to Lafayette, IN.
Upon her retirement, from the Lafayette School District, Jacque and Gary moved back to Lacon which had become their true home.
Jacque was preceded in death by her 4 siblings.
She is survived by her husband Gary; her furry child Prince Harry; her children Brad (Patricia) Keffeler of Chillicothe, Garilyn (Glenn) Wells of Minonk, Charlie (Mary Kate) Keffeler of Collierville TN, Jason (Jennifer) Keffeler of Peoria, and Shanda (Jeff) Carter of Peoria.
She is also survived by her grandchildren Brandon, Alex, and Paige Keffeler, Kiel, Aaron, Terra (Jacob), Clay, and Emily Wells, Miclain, Eliza, and Olivia Keffeler, Brianna, and Matt Keffeler.
She was so very proud of the birth of her first great-grand child, Indiana Flynn, son of Terra and Jacob.
Cremation rights have been accorded and a visitation will be held on Thursday December 13 from 5 to 7pm at the Immaculate Conception Church in Lacon with Rosary at 7. and a memorial mass will be held on Friday December 14 at 10 AM also at her church. Burial will be in the Immaculate Conception Cemetery in Lacon. Memorials can be made to Altar and Rosary Society or Saint Joseph's Nursing Home and online condolences can be left at lenzmemorialhome.com

To send flowers to the family or plant a tree in memory of Jacquelyn Ann Keffeler, please visit our floral store.

To send flowers to the family in memory of Jacquelyn Keffeler, please visit our flower store.