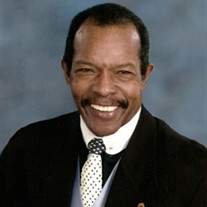 James Earl Pearson of
Bloomington died on October 6, at Advocate BroMenn Medical Center
in Normal. He was 72.

Memorial Service will be held on
Saturday, October 19, at 10:00 am at Mount Pisgah Baptist Church,
801 W. Market St., in Bloomington.  Rev. Frank L. McSwain, Sr
and Rev. John Gibson will officiate.  Memorials may be made to
Mt. Pisgah Christian Church Education Fund. Kibler-Brady-Ruestman
Memorial Home in Bloomington is assisting the family with
arrangements.

Born in York, AL to Fannie
(Sturdivant) Hunter and James Pearson, he was raised in Peoria and
was a 1959 graduate of Woodruff High School.

A member of the 1955 &
1957 undefeated Woodruff varsity football teams, he played
collegiate football for Bradley University and was a defensive
specialist for the semi-pro Canton Centaurs before entering the Air
Force.

He worked for Caterpillar Tractor
Co. in East Peoria as a Technical Graphic Artist and retired after
30+ years of service.

A local artist with extreme talent,
known for his portraitures, his work is featured on the exterior of
the Carver Community Center in Peoria, where he was a former member
of the Board of Directors.

His hobbies included basketball,
bowling, golf "Twin City Duffers", and he acted in many productions
in the Peoria area for the theater group at Caterpillar.

His many accomplishments include
being inducted in the African American Hall of Fame in Peoria, and
also the Woodruff High School Hall of Fame.

His parents; a brother, Richard
Pearson; and a son, Scotty Pearson, preceded him in death.

To send flowers to the family or plant a tree in memory of James Earl Pearson, please visit our floral store.

To send flowers to the family in memory of James Earl Pearson, please visit our flower store.