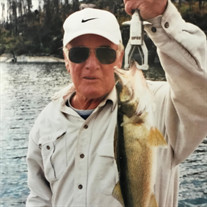 James D. Kavanaugh of Rural Washburn, formerly Joliet died on March 11, 2017 at his residence. Born in Joliet on August 11, 1930 to the late James L. and Ellen Wood Kavanaugh he married Barbara Hauser on October 3, 1959 in Manhattan, Illinois. Barbara passed away on March 11, 1989.

He served his country in the Air Force during the Korean war. Jim grew up in Ridgewood where his father owned a car garage. This is where he learned most of his mechanical skills. Jim was a maintenance superintendent at Distillers Limited in Plainfield where he worked for 25 years. He moved to rural Minooka in 1967 until 1992. He started hunting in 1944 and did so as much as he could, when he was not fishing.

In 1992 Kav (that's what they called him) moved full-time to Lockport Duck Club, near Lacon, Illinois. He was a passionate outdoorsman. At Lockport Duck Club, Kav was the chief engineer, mechanic, and farmer. There was no problem he couldn't solve. As manager of the club, he was indispensable. The Duck Club was ingrained in his life and the members were blessed to have him to rely upon. His shoes can never be filled and there will forever be a "Jimmy the Kav" void at LDC.

Cremation rights have been accorded and a Mass of Christian burial will be held for Jim at the Immaculate Conception Church in Lacon on March 25 at 3 PM. Private family burial will be at a later date.

Memorials can be made to Ducks Unlimited and online condolences can be left at lenzmemorialhome.com.

To send flowers to the family or plant a tree in memory of James D. Kavanaugh, please visit our floral store.

To send flowers to the family in memory of James Kavanaugh, please visit our flower store.