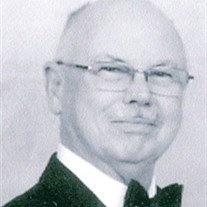 Graveside services will be held on
Saturday, June 29, 2013 at 2 pm at Evergreen Memorial Cemetery in
Bloomington with Fr. Philip Sang officiating. Full military rites
will be conducted by the Bloomington Normal American Legion Honor
Guard.

In lieu of flowers, memorials may
be directed to Holy Apostles Orthodox Church in Normal in James's
name. Kibler-Brady-Ruestman Memorial Home of Bloomington is
assisting the family with arrangements.

James was born on November 9, 1941
in Anniston, AL a son of James Weaver and Stella Mae (Abbott)
Adams. He married Yvonne Ganske on March 3, 1967 in Sacramento,
CA.

In addition to Yvonne, his wife of
46 years James is survived by his two daughters, Karen (Tim) Gubitz
and Clara (Douglas) Veal both of Bloomington; two grandchildren,
Joshua and Lauren. He also had the pleasure of mentoring Nancy
Bennett of Oregon and Philip Sang of Kenya, Africa, both of which
remain part of the family.

He was preceded in death by his
parents.

James served his country in the
United States Marine Corps from 1961-1964. After his discharge he
moved to Sacramento, CA for college. He received an MA in Civil War
Reconstruction History from California State University, in
Sacramento. Later he received a second MA in Business Management
from California Lutheran University in Thousand Oaks,
California.

He was employed by State Farm
Insurance Company retiring in 2000 after 30 years of service.

James was of the Orthodox Christian
Faith and was a member of Holy Resurrection Orthodox Church in
Johnson City, TN and most recently of Holy Apostles Orthodox Church
in Normal, IL.

His wife and daughters will ever
miss him. He was the love of Yvonne's life; they became adults and
grew to elders together. God Rest His soul, your prayers are
requested.

Online condolences and memories of
James may be sent to the family at kiblerbradyruestman.com.

To send flowers to the family or plant a tree in memory of James L. Adams, please visit our floral store.

To send flowers to the family in memory of James L. Adams, please visit our flower store.