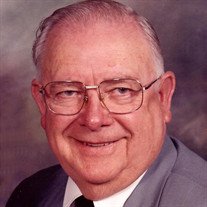 James A. Turner, 81, of Lacon died at 10:10 am on October 27, 2014 at St. Joseph's Nursing Home in Lacon. Born on October 5, 1933 in Charleston, MO to the late James and Lena Davis Turner, he joined the Navy and served in Korea in the 50's. He later married Ruth Buck in Havana, IL on August 18, 1963.
During his career James worked in the banking industry at several banks in Peoria, later ending up at American Family Insurance. After retiring from insurance, he drove a limousine for Deluxe Limousine in Peoria. He was a member of the Scottish rite, American Legion, and a former K of C.
James is survived by his wife Ruth; children Tamela Turner, James (Ruthann) Cowell, Margie Deffenbaugh, Timothy (Harriet) Cowell all of Lacon; sister Maxine Blane of Peoria; brother Frank Acuff of Chicago; 6 grandchildren and 13 great grandchildren.
He was preceded in death by his parents, and sisters Francis Vaughn and Jo Ellen Turner.
A Memorial Mass will be held on Friday, October 31 at 10:00 at the St. Joseph's Nursing Home Chapel in Lacon. Visitation is from 4-6 pm on Thursday at the Lenz Memorial Home. A prayer service will follow visitation at 6pm. Cremation rites will be accorded and burial of ashes will be in Salem Cemetery at a later date.
Memorials can be made to the St. Joseph's Nursing Home or to the family. Online condolences can be left at lenzmemorialhome.com

To send flowers to the family or plant a tree in memory of James Turner, please visit our floral store.

Please click here to view the video tribute
To send flowers to the family in memory of James Turner, please visit our flower store.