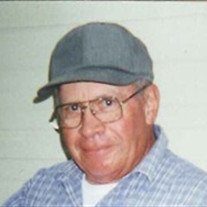 Eureka- James William Hawkins, 78, of Eureka, IL passed away at
9:10 am on Tuesday, January 14, 2014 at Washington Christian
Village in Washington,
IL.


He was born on December 1, 1935 in Bear Lake, Michigan a son of
Robert and Madge Kennedy Hawkins.  He married Betty Ann
Rentsch on February 7, 1959 in Metamora, IL at the Christian Union
Church.  She survives.


He was preceded in death by his parents, one son, Michael Hawkins,
one grandson, James Ausmus, and one brother, Robert Hawkins.


James had worked in trucking and management and retired after 40
years of service.  He was a member of the Teamsters
Union.  He also served in the Army Reserves in 1958.


James was a family man who enjoyed fishing, hunting, and working
on cars.


Graveside services will be held at 11:00 am on Friday, January 17,
2014 at Oakwood Cemetery in Metamora, IL.  Rev. Ron Martz will
officiate.  Argo-Ruestman-Harris Funeral Home in Eureka is
assisting the family with their arrangements.


Memorial contributions may be made to the ASPCA.  Online
condolences may be directed to the family at
www.ruestmanharrisfuneralhome.com.

To send flowers to the family or plant a tree in memory of James W. Hawkins, please visit our floral store.

To send flowers to the family in memory of James W. Hawkins, please visit our flower store.