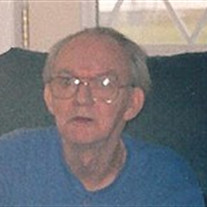 James E. Conarro, 79, of Chillicothe formerly of Lacon
died at 10:00 am on January
6th 2014 at
Heritage Manor in Chillicothe. Jim was born on April
12th 1934 in
Washburn to the late Frank and Anna Mae Reiter Conarro. He married
Marilyn Ahlstrom on May 22, 1955 in Varna.  They had 3
children. He later married Betty Elgin in 1970 and then Marge Haun
on August 12 1987. Marge survives. Jim worked at the Lacon Woolen
Mill and later spent over 30 years at Caterpillar.


Jim is also survived by his daughter Brenda (Fonzie) Rayburn of
Canton and sons Randy (Kris) Conarro of Streator and Kevin (Connie
Shrock) Conarro of Chillicothe. He had 2 grandchildren and 2 great
grandchildren.

Visitation will be held Friday, January 10 from 6-8pm at Lenz
Memorial Home in Lacon. Cremation rites will then be accorded and a
private family burial will be at a later date. Memorials can be
made to the Muscular Dystrophy Association. Online condolences can
be left at lenzmemorialhome.com

To send flowers to the family or plant a tree in memory of James Conarro, please visit our floral store.

To send flowers to the family in memory of James Conarro, please visit our flower store.