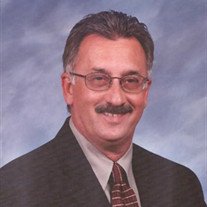 James W. Lehman, 62, of Eureka, Illinois passed away
at 7:30 PM on Tuesday, January 22, 2013 at OSF Saint Francis
Medical Center in Peoria, Illinois after a two-year battle with
cancer, surrounded by his loving family.

Jim was born on March 27, 1950 in Peoria, Illinois the son of
the late Clarence and Wilma Wittmer Lehman. He married Michele
"Shelly" Fehr on July 12, 1975 in Eureka, Illinois and she
survives.

Jim was employed by the City of Eureka for 37 years, serving as
the director of public works for the majority of that time. He
enjoyed the contact with the Eureka citizens, the daily variety and
the outdoor aspects of his job, especially plowing the first
overnight snowfall each winter when the quiet streets and warmly
lit homes gave the Eureka community a soft and peaceful air. One of
Jim's greatest joys was being his sons' No.1 fan in their sports
activities. He was a former coach and president in the Eureka Youth
Recreation Association program. He was a former president of the
Hornet Athletic Booster Club. He formerly enjoyed league softball
and bowling. He was a charter member of the Eureka Lions Club, and
was active in the Eureka Relay for Life to benefit the American
Cancer Society and at the Eureka United Methodist church, where he
was a trustee. He and Michele "Shelly" enjoyed traveling,
especially to England, Hawaii, and Alaska. His family and friends
will miss his supportive, loyal and cheerful presence in their
lives.

Argo-Ruestman-Harris Funeral Home in Eureka is serving Mr.
Lehman's family. To leave a condolence or to share a memory please
visit
www.ruestmanharrisfuneralhome.com
.

To send flowers to the family or plant a tree in memory of James Lehman, please visit our floral store.

To send flowers to the family in memory of James Lehman, please visit our flower store.