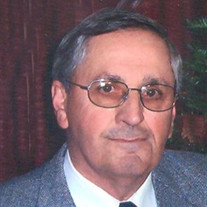 
He was preceded in death by his parents, one sister, Harriet Pisel
and one infant brother, Richard Lee Schumacher.


An Army Veteran, James served his country during the Vietnam War
from 1965-1966.


James worked at the Ulrich Manufacturing in Roanoke, Metamora
Industries in Metamora, Wayne's Used Parts in El Paso then before
retiring in December 31, 2012 he worked at Car Quest Parts in
Metamora.


James was a member, deacon and treasurer of Averyville Baptist
Church in East Peoria, IL.


Memorial contributions may be made to the American Cancer Society
or Averyville Baptist Church in East Peoria, IL or Richard L. Owens
Hospice Home in Peoria, IL. Online condolences may be sent to the
family at knappjohnsonharris.com.

To send flowers to the family or plant a tree in memory of James Schumacher, please visit our floral store.

To send flowers to the family in memory of James Schumacher, please visit our flower store.