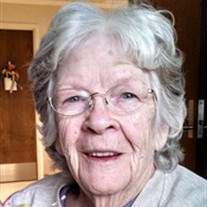 
She was preceded in death by a son Terry L.
Freeman, and brother, Bill Vandegraft.


Janelle enjoyed working crossword puzzles,
music, and the monthly luncheons with her siblings. Her greatest
love however, was spending time with her grandchildren whom she
adored.


Funeral services will be held at 2 PM on
Wednesday, February 26, 2014 at Argo-Ruestman-Harris Funeral Home
in Eureka. Rev. Joe Burns will officiate. Visitation will be held 1
hour prior to the service from 1-2 PM at the funeral home. Interment will be in Olio
Township Cemetery in Eureka.


In lieu of flowers and food, the family
requests that memorials be made to The American Legion Post #466 in
Eureka, or to The Alzheimer's Association of Greater Illinois.


Online condolences may be directed to her
family at www.ruestmanharrisfuneralhome.com.

To send flowers to the family or plant a tree in memory of Janelle Roseman, please visit our floral store.

To send flowers to the family in memory of Janelle Roseman, please visit our flower store.