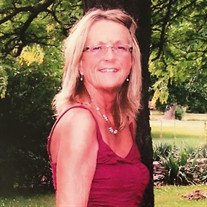 Janet Lee Grebner, 67, of Washington, died on October 15, 2017 at Richard L. Owens Hospice House in Peoria. Born in Peoria on September 25, 1950 to the late Clyde and Betty Baggs Ricky, she was a senior teller for over 10 years at PNC and National City banks.
Janet most of all in life loved her family. She was strong in her faith as a Catholic and lived a true life of unconditional love. Janet was a real angel on earth. She enjoyed bowling, boating, cleaning and yes, shopping, among many other things. She was an avid Broncos fan and loved watching her grandchildren become fine young men. Janet was kind to all she met, and was funny, with little discretion once she knew you. Janet was a great mom, grandma, great grandma, and friend. She will be so missed by all who knew her.
Janet is survived by: her son Aaron (Trena) Giosta of Metamora; daughter Tracy (Allen) Robbins of Morton; brother Jerry Ricky of Peoria; grandchildren Trenton (Jessica) Giosta of Metamora; Alec Robbins and Brendan Robbins both of Morton; Charlie Henson of Camas WA; Travis Henson of Spring Bay; and her great grandson Kolton.
Cremation rights have been accorded and a memorial service will be held on Thursday, October 26 at 11 o'clock at Saint Elizabeth's Catholic Church in Washburn, father Gregory Jozeflak officiating. Visitation will be held one hour prior and private family burial of ashes will be at a later date.

To send flowers to the family or plant a tree in memory of Janet Grebner, please visit our floral store.

To send flowers to the family in memory of Janet Grebner, please visit our flower store.