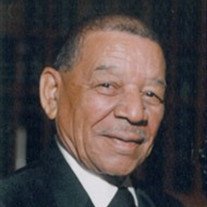 As a young man Jasper's first job
was delivering ice and coal with his younger brother Richard using
a horse and wagon. He later joined the Civilian Conservation Corp
earning a scholarship to Lincoln University, Jefferson City, MO.
Interrupted by World War II, he proudly served his country in the
Army as a commanders driver overseas. Honorably discharged, he
returned to school and graduated from Lincoln University with a BS
in High School Mathematics Education in 1948 He then played
baseball with several different teams in the Negro league before
beginning his teaching career in Missouri, where he also met his
future wife. He moved to Chicago and worked as a bartender prior to
moving to Bloomington. In the early 1960's, he had a leadership
role with the Bloomington YMCA before moving on to a Co-Director
position with the City of Bloomington Parks and Recreation program.
He helped organize the girls softballs leagues in
Bloomington-Normal, while umpiring softball games, refereeing
basketball games and working to strengthen race relations in the
community during the late 60's and early 70's. He also attended
Illinois Wesleyan University. After retirement, Jasper continued to
umpire softball games into his late 70's and also worked part time
at the Boys and Girls Club of Bloomington-Normal. He attended
Wayman AME church for many years. His passion for softball earned
him the love and admiration from thousands of participants
throughout central Illinois. His smile will be greatly missed by
his family and all the lifelong friends he made on the ball
diamond.

Funeral service will be held at
10:00 a.m. on Saturday, January 25, 2014 at Wayman AME church in
Bloomington with Rev. Toby Carlos officiating. Visitation will be
held from 4-7 p.m. Friday, January 24, 2014 at
Kibler-Brady-Ruestman Memorial Home in Bloomington. Full Military
Rites will be accorded by the Bloomington-Normal American Legion
Honor Guard.

Interment will be at Park Hill
Cemetery in Bloomington. In lieu of flowers, memorials may be made
to the Boys and Girls Club of Bloomington-Normal. The family has
entrust the care of their loved on to Kibler-Brady-Ruestman
Memorial Home in Bloomington.

The family extends their gratitude to the Nurses and Staff
of Heritage Health for their dedication to the care of our
beloved father, to Marshall, Laverne, Ruby Howard and Reverend
Carlos for their help and guidance. Special thanks to Nurse Cox for
helping take Jasper, Jazzy J, to his childhood home one last
time.

To send flowers to the family or plant a tree in memory of Jasper A. Simmons,, please visit our floral store.

To send flowers to the family in memory of Jasper A. Simmons,, please visit our flower store.