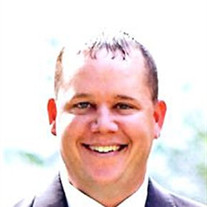 
Jeremiah was "one" with nature, he was as an avid
hunter, loved to four wheel, mushroom hunt, and he chose to spend
his time outdoors. He attended school in El Paso. He enjoyed being
an entrepreneur and owned his own painting business.


He knew diversity more than most, which allowed him
to be open to everyone. People could feel how genuine he was as he
always tried to make those around him feel better, selflessly
putting his own feelings aside. He had the biggest heart and the
most contagious laugh. He loved his sister's dearly and was a big
part of their lives. He enjoyed spending times with his nieces and
nephews at family cookouts. He loved his friends and, of course,
his family, but most of all his sons.


Funeral Services will be held at 1 PM on Saturday
April 19, 2014, at Ruestman-Harris Funeral Home in El Paso with
Rev. Tim Smith officiating. Visitation will be 2 hours prior to the
services from 11-1 at the funeral home. Burial will be in Evergreen
Cemetery in El Paso.


Memorials may be directed to Flanagan State Bank, to
the Jeremiah James Children Memorial Fund.


Online Condolences may be directed to his family at
www.ruestmanharris.com

To send flowers to the family or plant a tree in memory of Jeremiah James, please visit our floral store.

To send flowers to the family in memory of Jeremiah James, please visit our flower store.