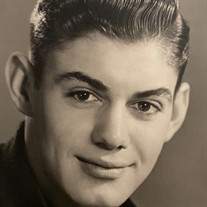 Jerome Gerald Mitchell Wilson, 85, of Lacon passed away on Tuesday July 28, 2020 at his home.
Jerry was born on November 5, 1934 in Lacon to Mitchell and Mildred (Wenz) Wilson. He married Mary M. Green on December 18, 1954 in Peoria.
Surviving is his wife of 65 years, Mary of Lacon; his children Chris (Ken Baum) Schlosser of Lacon, Erin (David) Olson of Lacon, Teri (Tim) Allen of Lacon, and Troy (Kelly) Wilson of Eureka; grandchildren Steven Schlosser, Nicole (Keith) Miller, Amy (Matt) Junker, Ashley (Jeremy) VanFossen, Mitchell (Ashley) Allen, Cory (Jamie) Allen, Nicholas Wilson, and Jon Wilson; twelve great grandchildren and one great great grandson. He is preceded in death by his parents and an infant son, Jerome Wilson.
Jerry was a US Air Force Veteran serving during the Korean War. He was a member of the AMVETS. He had a long career as an Operating Engineer with the Union Local 649 retiring in 1998.
Jerry was a member of Peoria Skeet and Trap in East Peoria. He was an avid decoy and duck call carver for many years. Jerry was a wonderful husband, father and grandfather. He raised a family he was very proud of and who loved him dearly!
A Private graveside service will be held on Saturday, August 1, 2020 at 11:00 AM at Immaculate Conception Catholic Cemetery with Military Rites. In Lieu of flowers memorials may be made to LS52.


To send flowers to the family or plant a tree in memory of Jerome Gerald Mitchell Wilson, please visit our floral store.

To send flowers to the family in memory of Jerome Wilson, please visit our flower store.