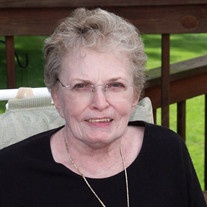 Joan was born January 29, 1929 in Dallas, TX, the only daughter of the late Lloyd and Lula Mae Anthony Walvoord. She attended the University of New Mexico in Albuquerque where she studied Design Engineering.

Joan was married to J. Shannon Jackson with whom she had three children. She later married Jim Keith.

In 1969, Joan and Jim left Albuquerque to work on NASA's Apollo Program in Houston, TX. Joan became a Design Draftsman, during which she was assigned to design the "personal evacuation system" for the first Apollo spacecraft.

In 2005, Joan and her partner, Nancy Moore left Albuquerque and moved to Peoria, IL to be near Nancy's family. Nancy passed away in October of 2014. They have been residences of the Liberty Village community for over 13 years.

Joan was an accomplished artist, painting many landscapes throughout her years. She loved art and could see the artistic beauty in everything. Having always lived in the Southwest, upon arrival in Peoria, she was over joyed with the variety of green in the trees and the terrain. Even when her first Peoria winter came, Joan's art perspective came forth. To quote her, "It is ok that all the green is gone from the trees. Now I can see their bones!" May we all look at the world around us with such depth of what beauty really is.

She was also preceded in death by former husbands J. Shannon Jackson and James Keith.

Cremation rites have been accorded and graveside service will be at 12:00 pm, Friday, April 27, 2018 at Swan Lake Cemetery, Peoria. Memorials can be made to Divine Mercy Cenacle, 13027 W. Park School Rd, Princeville, IL and online condolences can be left at lenzmemorialhome.com

To send flowers to the family or plant a tree in memory of Joan E. Keith, please visit our floral store.

To send flowers to the family in memory of Joan Keith, please visit our flower store.