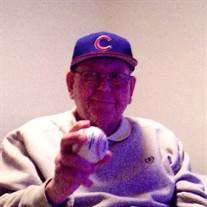 Soon after graduation, John enlisted in the Army and proudly served as a Sergeant in the European Theater during WWII where he was awarded the Bronze Star. Upon completion of his military duty he went to work for A&P foods as a meat buyer for 25 years and then worked for Hershey Foods. He then started his own meat processing business in Chicago. John's company, Old Fashion Meat, made only corned beef. His product was shipped nationwide and was a menu item in the Disney Parks. In 2001 John retired and moved home to Lacon.

He was a member of the Lacon American Legion and the Lacon Congregational United Church of Christ.

Services will be held on Friday, July 10 at 11 am at the Lacon Congregational United Church of Christ with Reverend Ross Wyman officiating. Visitation time will be one hour prior to the service at the church. Burial will be in the Lacon Cemetery.

Memorials can be made to his church or St. Joseph's Nursing Home. Online condolences can be left at lenzmemorialhome.com

To send flowers to the family or plant a tree in memory of John R. Beck, please visit our floral store.

To send flowers to the family in memory of John Beck, please visit our flower store.