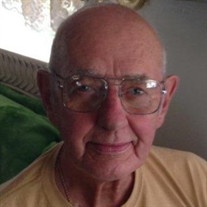 John T. "Jack" Boswell, 83, of Lacon, died on November 8, 2017 at Unity Point Methodist in Peoria. Born August 13, 1934 in Kewanee to the late Thomas and Lucille Clarke Boswell, Jack graduated high school and served his country in the Army. On April 4, 1975 he married Judy Pratt Scott in Lacon.
Jack worked for the CILCO power company for over 37 years, starting as a meter reader and finishing his career as the head of the Commercial Division. He volunteered to his community as a Former Shriner in the Legion of Honor, a South Ward Alderman, a member of the Mid County School Board, and the board of Lions Lair Homeowners Association in Marathon FL. Jack was a member of the Lacon American Legion. He later spent 12 years as a greeter at the Allen Road Walmart in Peoria. He loved golfing, fishing, watching the TV, and many adventures traveling with Judy.
Jack is survived by: his wife Judy; children Greg (Kim) Boswell of Lacon, Patty (James) Hedden of Chillicothe, Roger (Katie) Boswell of Morton; stepchildren Jeffrey Scott of Lacon, Janet (James) Mooney of Lacon; nine grandchildren; and two great-granddaughters. He was also preceded in death by his brother Robert.
Funeral service will be held Saturday, November 11 at 11am at Lenz Memorial Home in Lacon and visitation will be one hour prior to service. Cremation rights will be accorded and he will be scattered in the Atlantic Ocean. Memorials can be made to the Lacon or Henry ambulance services and online condolences can be left at lenzmemorialhome.com


To send flowers to the family or plant a tree in memory of John "Jack" Boswell, please visit our floral store.

To send flowers to the family in memory of John Boswell, please visit our flower store.