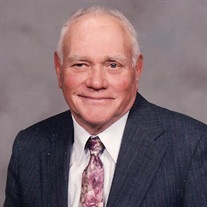 John W. Lundholm, 94, of rural Lacon, died at 1:15pm on August 20, 2014 at St. Joseph's Nursing home in Lacon. Born July 11, 1920 in rural Sparland to the late Walter and Ellen Johnson Lundholm, he married Evelyn Griffin in Lacon on May 17, 1941. Evelyn passed away on May 17, 1984. He later married Frances Schlosser in Lacon on April 12, 1986.
John was a farmer all his life, being sent to his uncles' farms even as a child to help out. He also was a carpenter and craftsman, repairing and updating homes in the area. He always said, "I helped folks live better."
John is survived by his wife Frances, son Kevin (Letty) Lundholm of New Philadelphia, OH; daughter Sharon (Ron) Gehrig of Sparland; step children Tom (Debbie) Schlosser of Rialto, CA; Greg (Marsha) Schlosser of Peru, Gary (Cheryl) Schlosser of Hopewell, and Bill (Marcia) Schlosser of St. Peters, MO. He is also survived by 4 grandsons, 3 great grandchildren, 18 step grandchildren, and 31 step great-grandchildren.
John was also preceded by his sisters Helen Laible and Mae Braun; step daughters Peg Schlosser-Davis and Marie Duke; and step grandson; Chris Duke.
Services will be Monday, August 25 at 11:00 am at St. John's Lutheran Church with Ryan Anderson officiating. Visitation will be on Sunday afternoon from 3-5pm at Lenz Memorial Home in Lacon. Burial will be in the Lacon Cemetery. Memorials can be made to his church or Marshall County Historical Society. Online condolences can be left at lenzmemorialhome.com

To send flowers to the family or plant a tree in memory of John W. Lundholm, please visit our floral store.

To send flowers to the family in memory of John Lundholm, please visit our flower store.