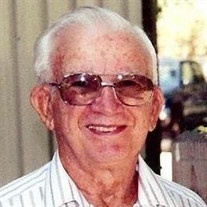 SPARLAND- John S. Mooberry, 93, of Sparland, passed away at 8:26 AM on Saturday May 5, 2018 at Evergreen Senior Living in Chillicothe.

Private family graveside services will be held and interment will be in Henry Cemetery.
Lenz Memorial Home in Lacon is assisting the family with arrangements. Memorials may be given to the Lacon Home Journal Christmas Fund.

John was born in Peoria on November 24, 1924, a son to Elmer and Edith Nighswonger Mooberry. He married his wife of 69 years; Betty Hawksworth in 1949. She survives.

John served in the Marines during World War II in the South Pacific. There he attained the rank of Corporal in communications and intelligence.

He was a lifelong mechanic and craftsman. In the early 1950s he built his family's two story home in Sparland where he resided for over 60 years. In the 1960s and 1970s he owned and operated Mooberry Trucking where he delivered construction products throughout central Illinois. He later worked and retired from R.S. Joliff in Lacon as a John Deere equipment mechanic. He loved tinkering with, driving and collecting vintage vehicles as a pastime. One of his favorite cars was a yellow Corvette which he drove in many local parades over the years. He was famous in the Lacon/Sparland area for cooking fresh caramels and chewies and delivering them to folks throughout the community.

John was a very delightful and generous person. He was known by many and loved by all.

To send flowers to the family or plant a tree in memory of John S. Mooberry, please visit our floral store.

To send flowers to the family in memory of John Mooberry, please visit our flower store.