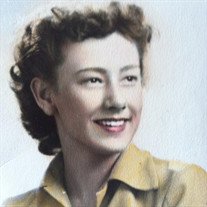 June Ruth Pocklington, 86 of Peoria passed away Thursday, November 6, 2014. June was born on April 18, 1928 in Milwaukee, Wisconsin to the late Fred and Norma Eichstaedt.
The family is planning a private service. In lieu of flowers, those wishing can donate to the National Kidney Foundation. Online condolences can be left at lenzmemorialhome.com
June's greatest passion in life was teaching children. That passion took form as a nursery school teacher and eventually as director of a local church nursery school. Her innovative ideas enriched her students who she lovingly called "The Little People" with out of the classroom trips to include a flight on Ozark Airlines, classroom activities such as having six Bradley University French majors teaching them French, using Snoopy and Charlie Brown as candidates to teach the importance of voting, traditions and customs of Holland, a visit from Smokey the Bear, following President Richard Nixon's diplomatic trip to China, and culminated with "A Tape Heard Round the World', article Peoria Journal Star, November 11, 1970.
What began as a preschoolers program where children recited the pledge of allegiance, sang patriotic and religious songs, and were led in a spontaneous discussion about patriotism for Armed Forces Day 1970, ballooned into a program which involved all branches of the US armed forces and a worldwide broadcast on Armed Forces Radio. These accomplishments were personally recognized and acknowledged by: President Nixon, US Congressman Robert H. Michel, numerous senior Pentagon officials, and most importantly the students' lives she touched.
June recently return from a trip to Colorado where she helped finalize the details with family members regarding the publication of a book titled, "The Little People" which documents her many activities and accomplishments. While visiting the USO at the Denver International Airport she was introduced to a volunteer who remembered hearing her program on Armed Forces Network while serving in Vietnam in 1970. Many years after her work with the preschool, June began a new career at the office of Township Relief as a receptionist in the office of Zack Monroe. By the time she retired, June was a case worker. Once again she was helping those most needy. At that same time she would end her workday and drive the forty five minutes to Lacon where she would care for George Olson. George and June became great friends and travel companions. According to her son Mark, "She treated the people she was helping with the same love and firm kindness as her students".
Her legacy continues through the lives of her sons Steven and his wife Tammra, Philip and his wife Anna, Mark, daughter Beth and her husband Steve, grandchildren Jason, Jeanne, Daniel, Stephanie, Andrew, Terry, Kaitlyn, and great-grandchildren Madison, Christopher, Brayden, Alexia, Breck, Layne, Rylie, and Norah.
June's greatest love of all was her faithful husband of 22 years, Bob. June and Bob met later in life. However a truer love story could not have been written. They loved and cared for each other every day.
Life's greatest lessons are those learned through others. Please remember our mother in this way.
Life is short, take care of the ones you love. Smile, laugh. A LOT! Celebrate every day as if it was your last. Open the window, and let it go....

To send flowers to the family or plant a tree in memory of June Pocklington, please visit our floral store.

To send flowers to the family in memory of June Pocklington, please visit our flower store.