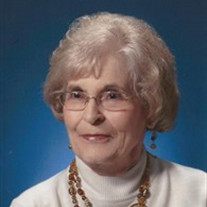 
June was born on her family farm in rural Wenona, IL on September
9, 1926 to Oliver H. and Gertrude F. Stenzel Scheuer. She attended
the one-room school house that was named for her Grandfather, Jacob
R. Scheuer, and graduated from Wenona High School in 1944.


One son, Bruce D. (Beth) Frank preceded her in death (2005); as
well as her four brothers Elmer, Ralph, Charles, and Russell
Scheuer, and one sister Maxine Ball.


June worked in various jobs before and after raising her children.
She was an avid reader, excellent cook and baker, and liked arts
and crafts. She and her husband were active in the American Legion,
where June served several terms as the Auxiliary President. She was
also a member of the United Methodist Church. Her greatest joy was
to be in the company of her large family where fun and laughter
rules the day.


Funeral services will be held at 11:00 am on Saturday November
16th at the Roanoke United
Methodist Church. Pastor Charlie Graul will officiate. Visitation
will be from 4-7 pm on Friday at the Knapp-Johnson-Harris Funeral
Home in Roanoke, and from 9:30-11:00 am before the funeral at the
church. Burial will be in the Roanoke Township Cemetery.


In lieu of flowers, Memorial contributions may be designated to
the RBHS District #60 Library or a library of your choice in her
memory. Online condolences may be sent to the family at www.knappjohnsonharris.com.

To send flowers to the family or plant a tree in memory of June Frank, please visit our floral store.

To send flowers to the family in memory of June Frank, please visit our flower store.