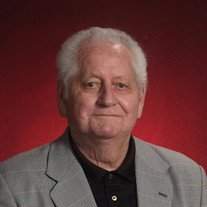 Funeral services for Justin William Edge, 94, of Davenport, IA, formerly of Lacon, IL and Scales Mound, IL/Shullsburg, WI area will be 11:00 a.m. Monday, October 12 at Lacon Congregational United Church of Christ, 205 N. Prairie St. The Rev. Ross Wyman will officiate. Justin's family will greet friends Sunday from 4-6 p.m. at Lenz Memorial Home, Lacon. There will be an additional visitation on Monday one hour prior to the service at the church. Cremation has been accorded. Burial of ashes will take place in Scales Mound, IL Cemetery at a later date.

Justin passed away Wednesday, October 7 at Good Samaritan Home in Davenport under hospice care. He was born December 8, 1920 at White Oak Springs, WI to William and Mary (Mittlesteadt) Edge. He was united in marriage to Evelyn Bradley on August 25, 1941 in St. Louis, MO. They recently celebrated their 74th wedding anniversary.

Justin was a well-known baseball pitcher in Southwest Wisconsin and played on a Chicago Cubs Farm Team in the 40's when he pitched a game against Dizzy Dean. While in high school he played a game against the Harlem Globetrotters. He always joked that he was chosen as prom king because he was the only boy in his class who knew how to dance. He also farmed in Wisconsin and later worked for the Illinois Grain Corp.-Growmark-ADM in Lacon for 18 years before retiring in 1986. He was a member of the Lacon Congregational United Church of Christ and a loyal, and often frustrated, Chicago Cubs fan.

His parents, two brothers, and a sister preceded him in death.

The family would like to express their thanks to the staff of Good Samaritan Home and Genesis Hospice for their loving care. In lieu of flowers, memorials may be made to his church or the Marshall County Historical Museum. Online remembrances and condolences may be expressed to the family by visiting Justin's obituary at www.lenzmemorialhome.com.

To send flowers to the family or plant a tree in memory of Justin W. Edge, please visit our floral store.

Please click here to view the video tribute
To send flowers to the family in memory of Justin Edge, please visit our flower store.