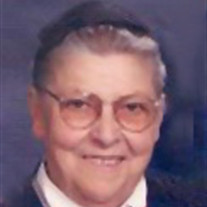 
Eureka- Kathe Hasty, 84, of Rochester, MN formerly of
Eureka, IL passed away at 1:00 am on Sunday, April 14, 2013 at
Sunrise Cottages in Rochester, MN where she had been a
resident.


She was preceded in death by her parents and one
infant son and daughter.


Kathe and her husband owned and operated a gas
station and beauty shop in Eureka.


Funeral services will be held at 2:00 pm on
Wednesday, April 17, 2013 at the Argo-Ruestman-Harris Funeral Home
in Eureka.  Visitation will be held from 1-2 pm before the
service.  Burial will be in the Goodfield-Congerville
Apostolic Christian
Cemetery.


Memorials may be made to Sunrise Cottages in
Rochester, Minnesota. Online condolences may be sent to the family
at www.ruestmanharrisfuneralhome.com.

To send flowers to the family or plant a tree in memory of Kathe Hasty, please visit our floral store.

To send flowers to the family in memory of Kathe Hasty, please visit our flower store.