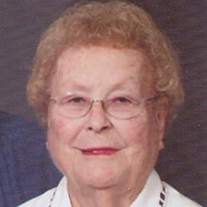 She was preceded in death by her parents, one son,
James Harms, one brother, and two sisters.

Kathryn was a homemaker and was very active with her
husband at running the family farm. She enjoyed living on the farm
and tending to her garden.

She was a member of the St. Paul Lutheran Church in
Benson where she had served on the church council and also as a
past president.  She also volunteered as a 4-H leader.

Funeral services will be held at 11:00 a.m. on
Thursday, February 21, 2013 at the St. Paul Lutheran Church.
Rev. Nathan Feig will officiate.  Visitation will be held from
9-11 am before the service at the church.  Burial will be in
the Clayton Township Cemetery.  Knapp-Johnson-Harris Funeral
Home in Roanoke is handling the arrangements for the family.

Memorial contributions may be made to the St. Paul
Lutheran Church or the Benson Ambulance.  Online condolences
may be sent to the family at www.knappjohnsonharris.com.

To send flowers to the family or plant a tree in memory of Kathryn A. Harms, please visit our floral store.

To send flowers to the family in memory of Kathryn A. Harms, please visit our flower store.