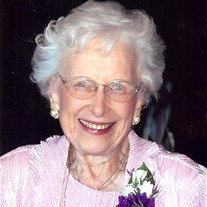 Kathryn (Katie) W. Breen, 94, of Lacon, Illinois, passed away at 11:32 p.m. Monday, November
17, 2014, at St. Joseph's Nursing Home. Katie was born August 31, 1920 in McNabb, Illinois to the late Thomas and Bertha Bogner Wolf. She married William Vincent Breen on July 29, 1947 at St. Mary's Catholic Church in Henry, Illinois. He passed away in 1989. Also preceding her in death were, one brother William Wolf and her son-in-law Dan Bakel.

Katie was a devoted member of the Immaculate Conception Church in Lacon. She grew up in McNabb, Illinois on a farm shared with her parents, sister, and brother. She became a registered nurse in 1941, graduating from St. Francis School of Nursing. She enlisted in the Navy Nurse Corps in 1942 and was commissioned as a 2nd Lieutenant stationed in San Francisco for two years caring for returning soldiers. Upon her return to Peoria she was employed by St. Francis Hospital. She later worked as a fulltime nurse at Proctor Hospital retiring in 1985 after 25 years of service.

Katie was a devoted wife, mother, grandmother and sister, always supporting and encouraging her husband and children in all their endeavors. She always had a comforting smile and a kind word for everyone she encountered. Throughout her life her faith was the mantra she lived by and she was a living role model of compassion for her family.

A mass celebrating Katie's life will be at 11:00 a.m. Saturday, November 22, 2014 at Immaculate Conception Church in Lacon with Monsignor Charles Bebee officiating. Burial will be at Immaculate Conception Cemetery next to her beloved husband. Military rites will be accorded. Visitation will be from 4:00 to 7:00 p.m. Friday, November 21st at the church; and also one hour prior to the funeral mass. Rosary will be said at 3:30 on Friday.

In lieu of flowers memorial contributions may be made to Immaculate Conception building fund, or the Lacon-Sparland Fire Protection District.

To send flowers to the family or plant a tree in memory of Kathryn "Katie" Breen, please visit our floral store.

Please click here to view the video tribute
To send flowers to the family in memory of Kathryn Breen, please visit our flower store.