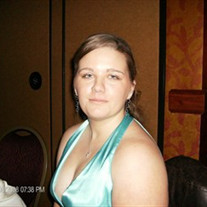 MINONK- Katrina Marie McDonald, 25, of North Carolina,
formerly of Minonk, died on Sunday December 15, 2013 at 8:50 AM,
at The Kitty
Askins Hospice Center in Goldsboro, NC.

She was born in Knoxville, TN on September 20, 1988, a
daughter of David Karl and Michelle Jacqueline Kerr Barth.

She married Christopher McDonald on January 9, 2010 in
Peoria. He survives.

Katrina was a member of the Jacksonville Bible Church in
North Carolina. She enjoyed crocheting and spending time with her
puppy Ivy.
She had aspired to become a social worker because of her big heart
and her love
for helping people, especially children.

Funeral Service will be held at 11:00 AM on Friday
December
20, 2013 at the Minonk United Church of Christ in Minonk. Revs. Ed
Sinclair and
Wes Ooms will concelebrate the service. Interment will be in
Minonk Township Cemetery.
Visitation will be from 4-7 PM on Thursday December 19, 2013 at
Ruestman Harris
Funeral Home in Minonk.

Online condolences may be sent to the family at
www.ruestmanharris.com

To send flowers to the family or plant a tree in memory of Katrina McDonald, please visit our floral store.

To send flowers to the family in memory of Katrina McDonald, please visit our flower store.