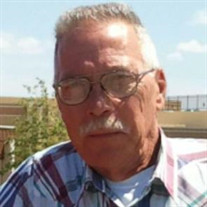 Keith worked at the Ranch House in high school and then Hageman Construction, building the dams for Lake Thunderbird and Lake Evergreen. He served his country as a medic in the Army in Germany, was a member of Henry American Legion Post 323, and a past Commander.

Keith spent over 40 years at Caterpillar starting as a CNC operator moving thru the ranks to retire as an Advanced Schedule Analyst in 2014. He belonged to Henry Hog Hunters, Full Throttle Bass Masters, The 8-man Bass Master Team, and formerly Peoria Casting Club. Keith loved to be outdoors, especially on the water fishing with friends and family.

Services will be held on Saturday, October 15 at 3 pm at The New Life Community Church in Henry with a visitation on Friday from 4-6 pm also at the church. Burial will be in the Henry Cemetery. Memorials can be made to the Henry American Legion. Online condolences can be left at lenzmemorialhome.com

To send flowers to the family or plant a tree in memory of Keith Barnes, please visit our floral store.

To send flowers to the family in memory of Keith Barnes, please visit our flower store.