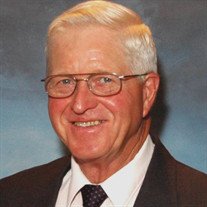 Kenneth Merlyn "Ken" McKee, 82, of Varna IL, died on March 26, 2019, at Richard L Owens Hospice Home in Peoria. Born in Varna on April 4, 1936, to the late Bert Merlyn and Katharine Smith McKee. He married Shirley JoAnn Kruger on January 27, 1957, in Urbana IL and celebrated 62 years of a loving marriage. She survives.
Ken is also survived by his son Kent (Amy Moore-McKee) of Varna; daughters Beth Ann McKee (Michael Girone) of Varna and Dawn (Mark) Zachgo of Independence MO; sisters Patricia (Gary, dec.) Halford of Wallingford VT, Barbara (James) Harrison of Shalimar FL, and Sue (Jim) Weber of Lacon; brother Larry (Judy) McKee of Germantown Hills; and grandchildren Kyle, Erin, Katharine, Mark, Nicholas, and Alex. He was preceded in death by his youngest son, Mark Richard.
Ken was a third generation farmer in Richland Township most of his life, and served his country in the Army Reserves, retiring as a Colonel after 33 years. Growing up, he participated in 4-H, FFA, sports, band, and chorus and graduated from Mid-County High School. He graduated from the University of Illinois in 1958 and was a member of many organizations including FarmHouse Fraternity, Hoof & Horn Club, ROTC, and was a manager of the Illini football team for four years.
As an adult, he served on many local volunteer boards including Washburn Christian Church as a deacon and elder, the school boards at both Mid-County and LaRose, many agricultural organizations such as Marshall-Putnam Farm Bureau, Illinois Valley Lamb & Wool Growers, Peoria Area Wool Pool, and Illinois Producers Livestock Association. Ken was honored to serve as president or vice president for many of those organizations. He also volunteered for 25 years as a 4-H club leader, as well as the sheep superintendent for the 4-H, FFA, and county fairs. Ken dedicated over 35 years serving as a local government official for Richland Township as Supervisor and a Trustee, as well as serving on Marshall County's Zoning Board of Appeals and Board of Review.
Ken was an all-around nice guy who didn't grumble or complain, as well as a sweet and loving husband, father, and grandfather. He made the world more beautiful with measureless gestures, which he did without recognition or expectation. His transition to Heaven was witnessed by his family and friends.
Cremation rights have been accorded and a graveside service will be held at Old Salem Cemetery on Saturday, July 6 at 2 PM with military honors following. Memorials can be made to Marshall-Putnam 4-H Foundation, Marshall-Putnam Farm Bureau Foundation, or Midland FFA Foundation. Online condolences can be left at lenzmemorialhome.com

To send flowers to the family or plant a tree in memory of Kenneth Merlyn McKee, please visit our floral store.

To send flowers to the family in memory of Kenneth McKee, please visit our flower store.