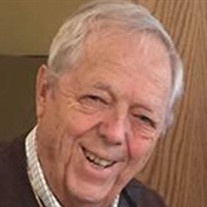 Kenneth LeRoy Snider "Popo", 86, of Washington, IL formerly of Washburn passed away at 9:45p.m. on Thursday, August 2, 2018 at his residence.
He was born on June 2, 1932 in Washburn a son of Forest Alvin and Verda Marguerite Shafer Snider. He married Patricia Catherine Reynolds on June 29, 1957 in Lacon and were married for 61 years. She survives.
Also surviving are his children, Margi(Kyle) Hodel of Germantown Hills; John(Mary Ellen) Snider of Dunlap; Jerry(Cheri) Snider of Mufreesboro, TN; 11 grandchildren, Cassie(Jason) Kennell, Bethany( Dan) Harms, Adam(Kalee) Hodel, Benjamin(Brittany) Hodel, Danielle(Eric) Compton Matthew Snider, Collin Snider, Spencer Snider, Megan Snider, Andrew Snider, Zachary Snider; 12 great grandchildren and one on the way in November.
He was preceded in death by his grandparents whom raised him Marcia L. and John Straud; sister, Velda(Paul) Engel and one brother, Eldon(Louise) Snider.
Ken worked at Caterpillar for 33 years and in his early years farmed in the Washburn area from 1958-1968.
Ken proudly served his country in the United States Navy during the Korean Conflict.
Ken was in the Knights of Columbus 3rd and 4th Degree. He also was a current member of the Peoria Cursillo, current member American Legion Post #661 in Washburn, Immaculate Conception Church in Lacon, St. Elizabeth Catholic Church in Washburn and St. Patrick's Catholic Church in Washington.
Ken volunteered at OSF St. Francis Medical Center in Peoria from 1991-2001 and frequently joined the sisters for morning mass with his "beautiful tenor voice." He was an avid golfer for over 50 years getting two holes in one. Ken was also a basketball referee for the IHSA for 20 years.
Funeral Mass will be held at 11:00a.m. on Monday, August 6, 2018 at the Immaculate Conception Church in Lacon. Monsignor Charles Beebe and Deacon Bob Murphy will officiate. Visitation will be held from 1-5p.m. on Sunday, August 5, 2018 at Lenz Memorial Home in Lacon with rosary at 5p.m. If you feel so inclined the family requests that you wear Cubs, Bears or Royals attire to the visitation. Cremation will be accorded after the funeral mass. Burial will be at a later date in Immaculate Conception Cemetery. Lenz Memorial Home is assisting the family with arrangements.
Memorial contributions may be made to Cursillo in Peoria or GoFundMe for Amy(Kennell) Lott cancer treatment or Peoria Honor Flight. Online condolences and tributes may be left at lenzmemorialhome.com.

To send flowers to the family or plant a tree in memory of Kenneth LeRoy Snider, please visit our floral store.

To send flowers to the family in memory of Kenneth Snider, please visit our flower store.