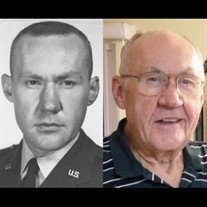 Larry L. Geick, 80, died on July 3, 2015 in Lacon, IL. Born in Peoria to the late Fred and Florence Theilbar Geick of Mossville, he married Marjorie Flanigan in 1956.

Larry graduated from Manual H.S. in Peoria in 1953 and completed a BS in Aircraft Maintenance Engineering at Parks College (St. Louis) in 1956 while part of the ROTC program. Following graduation, he proudly served his country in the Air Force as a pilot flying first F-86 fighters and later B-47 and B-52 bombers. He attained the rank of Captain before he was honorably discharged from the Air Force in 1965, and stayed in the Reserves until 1971. After his discharge in 1965, he was hired as a corporate pilot for Caterpillar, flying company leaders all over the world. Later he was Aircraft Division Manager, and eventually became Manager of the Traffic Division until he retired in 1991.

Larry loved his family and friends, reminiscing of his flying days, military history and genealogy, repairing or rebuilding anything and teaching others. Larry had a big heart, built trust on a handshake, and was a man of his word. In the last few years he was thrilled to reconnect with some of the surviving members of USAF Crew E-05, and coworkers from Caterpillar.

Larry was preceded in death by his eldest son Michael Geick of Bryan, TX and brothers: Orville Geick of Aurora, Ernest Geick of Metamora, and Jack Geick of Peoria.


A graveside service will be held on Saturday July 11th at 11:00 a.m. at Parkview Cemetery in Peoria. Memorials can be made to the American Heart or Lung Associations. Online condolences can be left at lenzmemorialhome.com


To send flowers to the family or plant a tree in memory of Larry L. Geick, please visit our floral store.

To send flowers to the family in memory of Larry Geick, please visit our flower store.