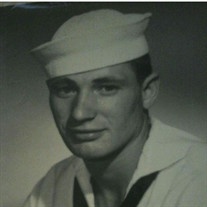 Larry L. Wilkins, 87, of Sparland, passed away peacefully at his home surrounded by his family on Tuesday, April 17, 2018.

He was born on January 1, 1931 to the late Neal and Margaret (Ball) Wilkins in Sparland where he attended Sparland schools. Larry married Barbara Ruth Hoskins on August 11, 1951 in LaPrairie, she survives.

Larry was an employee of Caterpillar Tractor Company, retiring in 1982 with 34 years of service as a proud member of UAW local 974. He also worked as a bus driver for Sparland and Midland school districts. Larry served four years with the U.S. Navy aboard the USS Preston during the Korean War and was a member of the Lacon American legion post 593.
Larry was an avid duck hunter, enjoyed fishing and was extremely talented at finding morel mushrooms, never revealing "THE" spot. You could also find him playing cards with the guys at the 15 club where he was also a member.

Cremation rights have been accorded and a private graveside service will be held at the Lacon Cemetery at a later date. Memorials can be made to the donor's choice and online condolences can be left at lenzmemorialhome.com

To send flowers to the family or plant a tree in memory of Larry L. Wilkins, please visit our floral store.

To send flowers to the family in memory of Larry Wilkins, please visit our flower store.