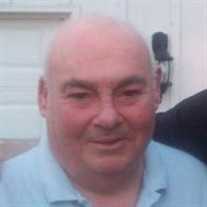 Lenexa, KS - Wayne Gallup, age 80, of Lenexa, KS died Thursday, May 9th, 2019, at Sunrise Senior Living of Lenexa where he has lived for the past seven years. Prior to that, he lived on the family farm in Sparland, IL.
He was born July 3, 1938, in Peoria, IL, to Harold and LuVerne (Wiley) Gallup. He married Loretta Tomberlin on August 4, 1963, In Lacon, IL.
He is survived by one son, Thomas (Shirley) Gallup of Lenexa, KS; one sister, Elaine (Gary) Hecathorn of East Peoria, IL; twin grandchildren, Bailey and Colby Gallup; four step-grandchildren Rachel (Roger) Garrison, Patricia Whitlock, Christopher Whitlock, and Alexis Stoneking; one step-great-grandchild, Thalia Garrison with another due in June.
He was preceded in death by his parents and wife, Loretta.
He retired from Caterpillar, Inc. in 1995 after working there as a Forklift Operator at the Mossville plant for most of his 30 years.
In his youth, he was extremely active in 4-H with many honors including being a delegate to the National Club Congress in 1959, and being declared national champion of the Livestock Judging competition in Kansas City.
Wayne and his wife shared a love of showing cattle. They, along with their son, Tom, showed cattle at many county fairs across the state of Illinois, as well as other state and national events. He was also an avid basketball fan, attending thousands of high-school games over 50+ years. He was inducted into the Illinois High School Basketball Hall of Fame as a "Friend of Basketball" in 2001.
Services will be at 2 p.m. Sunday, May 26, 2019 at Lenz Memorial Home in Lacon, IL with visitation two hours prior. Cremation rites have been accorded and interment of ashes will be in the Chillicothe City Cemetery immediately after.
Memorials may be made to the Dementia Society of America or the National Multiple Sclerosis Society of Greater Illinois.


To send flowers to the family or plant a tree in memory of Lawrence "Wayne" Gallup, please visit our floral store.

To send flowers to the family in memory of Lawrence Gallup, please visit our flower store.