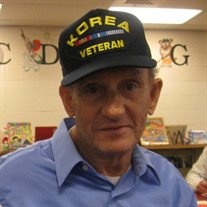 Lee William Kline, 88 formerly of Chillicothe and rural Lacon, passed away at 1:45 pm Wednesday, March 20, 2019 at Illinois Valley Community Hospital, Peru, IL.
Born January 24, 1931 in Oskaloosa, Kansas to the late Thomas and Rena (Gibson) Kline, Lee was the oldest of 7 children.
He married Louise Lindstrom on December 6, 1953 at First Methodist Church, Lacon, IL. Louise died April 18, 2006 in Chillicothe.
He was also preceded in death by brothers, Wayne (Beverly) Kline, Sam (Sharon) Kline, & Clifford Kline and sister Helen (Loren) Blakely.
Surviving are: his daughters Terry Lee (David) Lueders of Henry & Tammy Lee (Mike) Doran of St. Charles MO; beloved grandson Jonathan Michael "Jack" Doran; sisters Kathy (John) Cox of Peru & Ruth (Paul) Reyelts of Grand Rapids MI; and many loved nieces & nephews.
Lee served in the US Army during the Korean War as a Staff Sgt. In the 2nd Division of Combat Engineers. He was stationed at Camp Fuji Japan for training and then was sent to Korea where he operated heavy equipment near Old Baldy & T-Bone Hill. Lee was pleased to be on the June 3, 2014 Peoria Honor Flight. He was a member of the Lacon American Legion & the Taylor Masonic Lodge #98, Washington, IL.
Lee & wife Louise farmed grain & livestock in Woodford and Marshall Counties after he returned from the service. When he retired from farming, he drove a bus for Peoria Charter Coach, accumulating over 769,000 miles. He started with the O'Hare Airport run, graduated to Globus tours all over the US & into Canada. Lee was also the team driver for the Peoria Chiefs baseball team and the Peoria Rivermen Hockey Team. The Rivermen won the Turner Cup in 1991 during his time with them. When he retired from driving he also spent a few years working at Kroger in Chillicothe
Lee was, to put it mildly, an avid vegetable and flower gardener. He loved sharing his bounty and every doctor visit had a vase of roses for the office.
A funeral service will be held on Monday March 25 at 10am at Lenz Memorial Home in Lacon. Visitation will be Sunday March24 from 3-5pm also at Lenz in Lacon. Military rites &burial will be in the Chillicothe City Cemetery and memorials can be made to Peoria Honor Flight, P.O. Box 5072, Peoria, IL 61601 or online at greaterpeoriahonorflight.org. Online condolences can be left at lenzmemorialhome.com


To send flowers to the family or plant a tree in memory of Lee W. Kline, please visit our floral store.

Please click here to view the video tribute
To send flowers to the family in memory of Lee Kline, please visit our flower store.