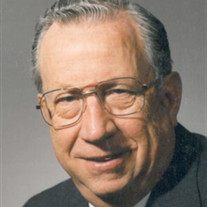 Normal-LeGrande C. Poor, 88 of
Normal passed away on Sunday, May 5, 2013 at Advocate BroMenn
Regional Medical Center in Normal at 3:15 pm. Funeral services will
be held on Friday, May 10, 2013 at The Church of Jesus Christ of
Latter-day Saints, 1636 Hovey Avenue, Normal at 6:30pm with Bishop
Joseph Goodman officiating. Visitation will be held on Thursday,
May 9, 2013 at Kibler-Brady-Ruestman Memorial Home in Bloomington
from 6-8 p.m., along with one hour prior to the services on Friday
at the church.

In lieu of flowers memorials may be directed to the American
Heart Association or to the American Cancer Society in LeGrande's
name. Interment will be in the Herriman Cemetery in Herriman, Utah.
Kibler-Brady-Ruestman Memorial Home in Bloomington is handling
local arrangements for the family.

LeGrande was born on October 1, 1924 in Herriman, Utah a
son of Cecil Oliver and Fern (Miller) Poor. He married Peggy
Peterson on June 12, 1953 in Salt Lake City, Utah; she
survives.

He was preceded in death by his parents, a brother, Arthur R.
Poor and one sister, Elise Thomas.

After graduating high school LeGrande served his country
in the U.S. Navy during WWII and was stationed in the Philippines.
He attended the University of Utah where he graduated with a degree
in business. While he was attending college he started working with
State Farm Insurance Company as an Agent. In 1959 he accepted what
was to be a two year assignment at State Farm's Corporate offices
in Bloomington, IL. He stayed at Corporate for 31 years until his
retirement in 1990.

LeGrande was a member of The Church of Christ of
Latter-day Saints in Normal where he served in many roles
throughout the church. He served as Branch President and later
became the first Bishop of the Bloomington Ward. LeGrande was
involved in the High Council of the Champaign IL Stake, served as a
counselor in the stake Presidency and was a stake Patriarch in the
Peoria IL Stake.

He truly enjoyed working on his family history and
genealogy projects, and also loved spoiling his grandchildren.

Online condolences may be sent to the family at
kiblerbradyruestman.com.

To send flowers to the family or plant a tree in memory of LeGrande C. Poor, please visit our floral store.

To send flowers to the family in memory of LeGrande C. Poor, please visit our flower store.