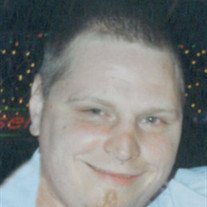 Leigh was born on August 13, 1974
in Bloomington, a son to George and Linda (Shelton) Denison.
He married Dawn L. Boyd on December 20, 2003 in Bloomington.
She survives.

He is preceded in death by his
father, George.

Leigh was employed as an installer
by Randy DeVary Tiling in Bloomington.

A memorial service will be at 10:00
a.m. on Wednesday, January 8, 2014 at the Salvation Army with Capt.
D.J. James officiating.  Kibler-Brady-Ruestman Memorial Home
in Bloomington is assisting the family with arrangements.

Memorials may be made to an
educational fund for his son Jayson.

To send flowers to the family or plant a tree in memory of Leigh E. Denison, please visit our floral store.

To send flowers to the family in memory of Leigh E. Denison, please visit our flower store.