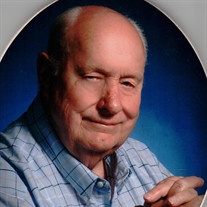 Leroy J."Lee" Swingler, 91, of Chillicothe, formerly Sparland, died on December 31, 2017 at Heritage Healthcare in Chillicothe. Born on October 10, 1926 in Chicago Heights IL to the late Sylvester and Agnes Feisting Swingler, he married Lorraine Fortier on May 31, 1948 in Chicago. Lorraine passed away on January 15, 2011.
Lee was in the Navy during WWII in a special unit of sailors that served as gunners on B 17's in the Pacific Theatre. He owned his own construction companies, was a carpenter & cement mason. Lee was construction supervisor for several factories built by UNR Levitt and for a military base in Saudi Arabia. He was a lifelong member of the VFW, the United Brotherhood of Carpenters and Joiners in Chicago, Immaculate Conception Church in Lacon and Cursillo. Lee was an avid woodworker in retirement and member of Pearce Community Center in Chillicothe.
Lee is survived by his sons James (Doris) Swingler MD of Dunlap, Thomas (Christina) Swingler DDS of Frankfort, daughter Valerie (Mark) Harris of Danville, Brother Dan Swingler and sister Norma Pellegrino both of Arizona, grandchildren Jamie, Timothy, Robert, Mark, Kim, Annie, and Amy, and one great grandchild. He was also preceded in death by daughter Tony Wheitendorf and brother Raymond Swingler.
A Mass of Christian burial will be held on Friday, January 5, 2018 at 11:00 AM at the Immaculate Conception Church in Lacon with Fr. John Mujuni officiating. Burial will follow in the Immaculate Conception Cemetery and memorials can be made to his church. Online condolences can be left at lenzmemorialhome.com

To send flowers to the family or plant a tree in memory of Leroy "Lee" Swingler, please visit our floral store.

To send flowers to the family in memory of Leroy Swingler, please visit our flower store.