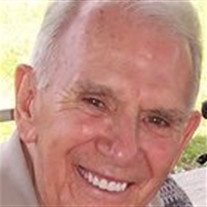 PEORIA- Leslie J. Waldo, 93, of Peoria, formerly of Lacon, died at 7:43 PM on July 23, 2014 at the Richard Owens Hospice Home in Peoria.
He was born on July 28, 1920 in Lacon to the late James A. and Blanche M. Coon Waldo. He married Helen R. Griswold on December 25, 1942 in Lacon. She preceded him in death in 2002.
He is survived by his children, Michael J. (Sharon) Waldo, Pickerington, OH, Patsy (Curtis) Hale, Morton, Roger ( Karen) Waldo, Peoria; 4 grandchildren, Timothy ( Erica) Kennedy, Katie (Josh) McKown, Shanna (Josh) Dickey, Michael L. (Sarah) Waldo; and 8 great-grandchildren, Kellan Kennedy, Carson Kennedy, Colten Kennedy, Macie McKown, Ty McKown, Jack Dickey, Lyla Dickey, and Jolie Dickey.
He was preceded in death by 2 granddaughters, Jennifer and Gail Kennedy; and a brother Ora Baggs.
Les served as a Morse Code Operator in Panama during WWII in the United States Navy. He retired from Hiram-Walker as a transportation supervisor. He had served as a past president of the Mid-County School District for several years. He had also served as post Commander for the Lacon American Legion. He was a member of First United Methodist Church in Peoria. He enjoyed being in his yard watching the animals and nurturing his roses. Mostly he enjoyed the time spent with his family whom he adored.
Funeral Services will be at 2 PM on Saturday July 26, 2014 at Lenz Memorial Home in Lacon with Rev. Carolyn Carnes officiating. Visitation will be one hour prior to services at the funeral home. Interment will be in Lacon Cemetery.
Memorials may be given to Apostolic Christian Restmor of Morton, or to the Richard Owens Hospice Home in Peoria.
Online Condolences may be directed to his family at www.lenzmemorialhome.com


To send flowers to the family or plant a tree in memory of Les J. Waldo, please visit our floral store.

To send flowers to the family in memory of Les Waldo, please visit our flower store.