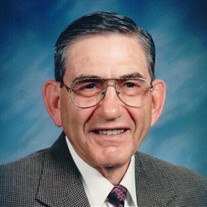 Louis James Fenoglia, 87, of Lacon, IL passed away peacefully on the morning of April 8th, 2017 at Heartland Health Care Center in Henry, IL with loving family, including his wife and life partner, Marjorie D. Fenoglia, at his side.

Jim was born on September 24th, 1929 in Toluca, IL to Louis & Agnes (Kasha) Fenoglia. He graduated Toluca High School in 1947 where he excelled in baseball and basketball. He married his soulmate, Marjorie D. (Neu) Fenoglia, on February 3rd, 1951 at the St. Patrick Catholic Church in Minonk. She survives.

He is preceded in death by his parents and only brother, John J. Fenoglia, a WWII Veteran and Purple Heart recipient.

After high school, Jim worked at the Toluca Garment Factory for 26 years. He then went on to work at Caterpillar for 18 years before he retired in 1991. Throughout his retirement, he found much joy crafting his signature "barn siding" bench, to which he sold at the Spoon River Drive for many years alongside his wife.

Jim was a devoted member of the Immaculate Conception Catholic Church in Lacon. He was the President of the Washburn Saddle Club for many years. He was known for being an outdoorsman that enjoyed hunting, fishing, horseback riding, as well as his daily walks around the block. He took much pride in his yard and garden, constantly claiming to have grown the "World's best tomatoes." He was an avid reader who was fascinated by Native Americans. He was also very passionate in attending and cheering on all his kids and grandkids at their competitive events throughout the years.

"Jimmy" will be remembered for many qualities, but his willingness to always lend a helping hand to whomever asked, as well as his beautiful smile, will be dearly missed by all his family and friends.

Memorial contributions may be made in Jim's memory to a charity of the donor's choice.

To send flowers to the family or plant a tree in memory of Louis James Fenoglia, please visit our floral store.

To send flowers to the family in memory of Louis Fenoglia, please visit our flower store.