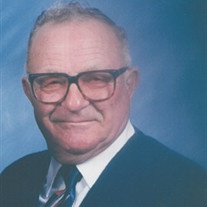 Mass of Christian Burial will be
held at Epiphany Catholic Church at 10 am on Thursday, February 7,
2013 in Normal with Msgr. Eric Powell officiating. Visitation will
be held from 9 am until the time of the Mass at the Church also on
Thursday.

Interment will be at Holy Cross
Catholic Cemetery in Normal. Kibler-Brady-Ruestman Memorial Home
has been entrusted with handling arrangements for the family. In
lieu of flowers, memorial contributions in Lyle's name may be made
to the Epiphany Catholic Church Building Fund or the American Heart
Association.

Lyle was born in Chenoa, IL on
October 4, 1927 a son of Allen and Opal (Kimble) Schopp. He
graduated from Normal Community High School in 1945. Lyle married
Dorothy Fackler on October 1, 1955 in Colfax at St. Joseph's
Catholic Church, she survives.

He was preceded in death by his
parents, a twin sister, Leah Melton, sister, Marcella Booziotes,
and sister Dorothy Mae Schopp.

He was a farmer for 60 years and
also served on the McLean County Sheriff's Department for 7 years
as a Sergeant. He was awarded Policeman of the Year from 1972-1973
from the department. In 1979 Lyle was awarded the Golden Harvest
Dry Land Award for the highest yield in the nation, earning them a
trip to Hawaii.

Lyle and Dorothy enjoyed traveling;
having been to Europe three times and on six cruises. They also
went to Las Vegas twice a year but their most favorite enjoyment
was spending time with their family and driving around the
countryside watching the crops grow.

He was proud to be a life-long
farmer and also enjoyed fishing with his wife Dorothy and their six
friends. Lyle also enjoyed spending time at the Wapella Auction
House and other farm sales around the area.

Lyle proudly served his country in
the United States Army during the Korean War.

He never met a stranger and could
always talk to anyone, anywhere. Lyle will be sadly missed by his
family and friends.

To send flowers to the family or plant a tree in memory of Lyle A. Schopp, please visit our floral store.

To send flowers to the family in memory of Lyle A. Schopp, please visit our flower store.