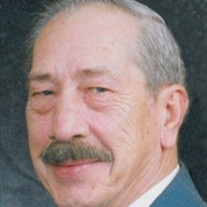 Normal-Lyle Eugene Woith, 84 of Normal, passed
away on Sunday, January 13, 2013 at 11:45 pm in Normal at Heartland
Health Care.  Funeral Services will be held on Saturday,
January 19, 2013 at 2:30pm at Park Hill Mausoleum with Pastor Chris
Nitzel officiating. Visitation will be held from 1-2 pm at
Kibler-Brady-Ruestman
Memorial Home in Bloomington with  military rites being
accorded  by the Bloomington-Normal American Legion Honor
Guard at the memorial home.

Entombment will be at Park Hill Cemetery in Bloomington. In lieu
of flowers, memorial contributions may be directed to the Korean
War Veterans War Monument fund in Washington, D.C.
Kibler-Brady-Ruestman Memorial Home in Bloomington is
assisiting the family with arrangements.

Lyle was a graduate of Bloomington High School. Early in his
life he worked for Pantagraph Printing and Stationary he later
retired from Original Smith Printing where he worked as a
pressman.

In addition to his three wives, Lyle was preceded in death by
his parents, and one brother, Robert Woith.

Lyle proudly served his country during the Korean War in the
24th Infantry Division of the United States Army he also
served in the US Army Reserves for 25 years.  He was a member
ofthe Korean War Veterans Association of Alexandria, Virginia.

He was an avid bowler for many years on leagues at Oakland Bowl
and Circle Lanes.  Lyle enjoyed hunting and fishing in his
earlier years.  He truly loved the time he and his wife Betty
spent during their retirement in Florida.

Online condolences may be sent to the family at
www.kiblerbradyruestman.

To send flowers to the family or plant a tree in memory of Lyle E. Woith, please visit our floral store.

To send flowers to the family in memory of Lyle E. Woith, please visit our flower store.